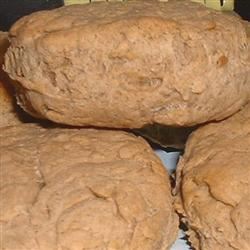 Preheat the oven to 450 degrees F (230 degrees C). Set an oven shelf in the top third of the oven for baking.

Sift the flour, salt, baking soda, cream of tartar, cinnamon and mixed spice into a large bowl. Rub in butter until the mixture resembles bread crumbs. In a small saucepan, gently heat the milk and stir in the sugar and treacle until dissolved. Remove from the heat and pour into the dry ingredients. Stir until it turns into a soft dough.

Turn the dough out onto a floured surface and knead lightly until smooth. Use a rolling pin to roll out to 1/2 inch thickness. Cut into 2 inch circles, rerolling dough until it has all been used. Place the scones on a lightly greased or floured baking sheet.

Bake for 12 to 15 minutes in the preheated oven, until the bottoms are lightly browned. Cool on a wire rack. Serve split. Don’t use a knife to split them, rather pull them apart into two halves gently with your hands.

The best flavour of the flour can make a real deal to your bread. Different brands do vary. Great taste or Canadian flours, which are bet higher in gluten, may give you a better rise than standard bread flours – especially if you’re make wholemeal dough , which doesn’t always getting bigger as well as clear bread.

A dough’s first rising can be done in the fridge overnight . This slows down the time it takes to rise to double its size, giving it a deeper flavour. It’s also a great timesaver , as you can start it night before , then clear it off the next day.