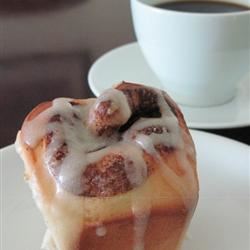 Cinnamon rolls that you make the night before and bake the next morning. The recipe is my sister’s, who is a Home Economics teacher.

In a small bowl, dissolve yeast in warm water. Let stand until creamy, about 10 minutes.

In a large bowl, combine the yeast mixture with the sugar, salt, egg and 1 cup flour; stir well to combine. Stir in the remaining flour, 1/2 cup at a time, beating well with each addition. When the dough has pulled together, turn it out onto a lightly floured surface and knead until smooth and elastic, about 8 minutes. Cover with a damp cloth and let rest for 10 minutes.

Lightly grease an 8x8 inch square baking pan. Roll dough out on a lightly floured surface to 1/4 inch thick rectangle. Smear the dough with butter and sprinkle with cinnamon and brown sugar. Roll up the dough along the long edge until it forms a roll. Slice the roll into 16 equal size pieces and place them in the pan with the cut side up.

Cover pan with plastic wrap and refrigerate overnight or cover and let rise at room temperature until doubled in volume, about 45 minutes.

The quality of the flour can make a real deal to your bread. Different makers do vary. Extra-strong or Canadian flours, which are bet higher in gluten, may give you a best rise than standard bread flours – especially if you’re making wholemeal bread , which doesn’t always rise as well as clear bread.

A bread first rising can be done in the fridge 24 hours . This slows down the time it takes to rise to double its size, giving it a deeper flavour. It’s also a great timesaver , as you can work it yesterday , then clear it off the next day.