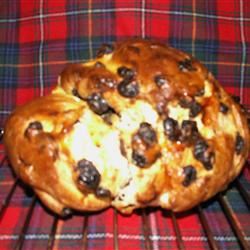 There are many versions of bannock in the U.K. This one is supposedly the first bannock ever made by bakery owner Robbie Douglas in 1859. It is said that Queen Victoria would have nothing else with her tea.

In a small saucepan heat milk to simmering and remove from heat. Mix in the butter and stir until melted. Let cool until lukewarm.

In a large bowl, mix flour, sugar, yeast and salt. Stir lukewarm milk into flour mixture until a soft dough is formed. Turn dough out onto a lightly floured surface and knead until smooth and elastic, about 5 minutes. Lightly oil a large bowl, place the dough in the bowl and turn to coat with oil. Cover with a damp cloth and let rise in a warm place until doubled in volume, about 1 hour.

Deflate the dough and turn it out onto a lightly floured surface. Knead in raisins and shape into a large round loaf. Place the loaf on a lightly greased baking sheet, cover with a damp cloth and let rise until doubled in volume, about 60 minutes.

Brush risen loaf with egg yolk mixture. Bake in preheated oven until loaf is golden and bottom sounds hollow when tapped, about 40 minutes. Transfer to a wire rack to cool.

The best flavour of the flour can make a real deal to your bread. Different makers do vary. Great taste or Canadian flours, which are bet higher in gluten, may give you a better rise than standard dough flours – especially if you’re make wholemeal bread , which not always getting bigger as well as clear bread.