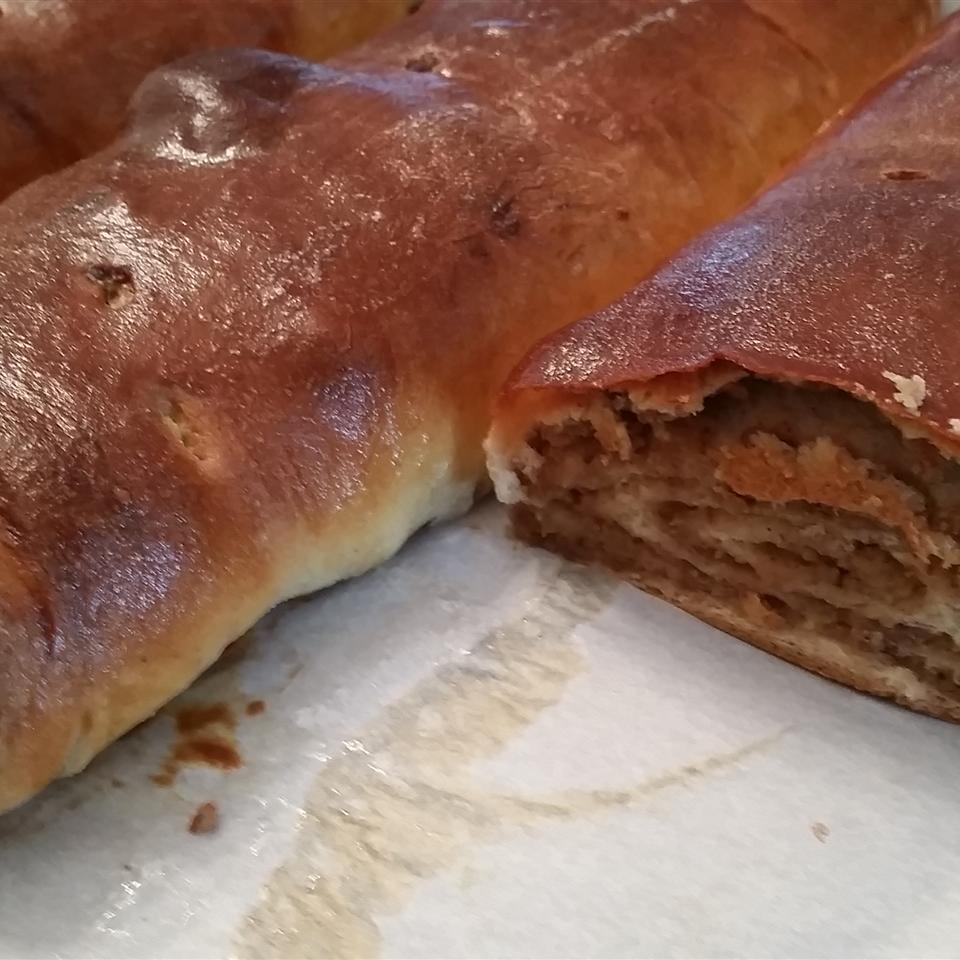 Homemade nut roll and poppy seed roll that is sweet and moist. These recipes have been passed down from my grandmothers to my mother who combined three into one recipe.

Heat 2 cups of milk in a saucepan over low heat until the milk just comes to a simmer; remove from heat, and let cool. Mash the cake yeast with the warm water in a bowl, and set aside.

In a bowl, whisk together the flour with 1 teaspoon of cinnamon and 1 teaspoon of nutmeg. In a separate large bowl, mash the butter with 1 cup of sugar and the salt until the mixture is smooth and creamy. Beat in 2 eggs and 1 teaspoon of vanilla extract. After milk is cooled to a warm temperature, stir the yeast mixture into the scalded milk, and stir the milk mixture to the creamed butter mixture. Beat in 3 cups of flour until completely incorporated, and beat in remaining flour, 1/2 cup at a time, until the mixture forms a smooth dough that’s almost sticky. Dough will be very soft.

Turn the dough out onto a well-floured work surface, and knead until smooth and elastic, about 8 minutes. Place the dough into an oiled bowl, and turn the dough over to coat all sides with oil. Cover with a floured kitchen towel, and let rise in a warm place until doubled, 2 to 3 hours.

Punch down the dough, cut into 6 equal pieces, and roll each piece into a ball. Cover with floured kitchen towel, and set the balls into a warm place to rise until doubled, 40 minutes to 1 hour.

While dough is rising the second time, make the nut filling: tear toasted bread into a few pieces, and grind toast with walnuts and pecans in a food grinder, or process in the work bowl of a food processor until finely chopped. Place the nuts into a bowl; mix in 1 teaspoon of vanilla extract, 1 cup of honey, 1/2 cup of sugar, 1 teaspoon of cinnamon, and 1 teaspoon of nutmeg until thoroughly combined. Mix in milk, a little at a time, to make a workable mixture.

Beat egg whites to stiff peaks in a bowl with an electric mixer, and gently fold the egg whites into the nut mixture until completely combined.

Roll out each piece of dough on a floured surface into a 12-inch square; brush with melted butter. Spread 1/6 of the nut mixture onto each square of dough, and roll each into a log; pinch ends and seam tightly together, and tuck the ends underneath the roll. Place filled rolls on the prepared baking sheet, seam sides down.

Beat egg yolks and 1/2 cup of milk together in a small bowl, and brush the rolls with the egg yolk mixture. If desired, allow to rise 30 more minutes (for more puffy rolls). Poke holes in the rolls every 4 inches.

Bake in the preheated oven until golden brown, 50 to 65 minutes. A toothpick inserted into the center of a roll will come out clean. Brush rolls with melted butter after removing from oven; allow to cool on racks.

The best flavour of the flour can make a real difference to your bread. Different brands do vary. Great taste or Canadian flours, which are naturally higher in gluten, may give you a better rise than standard bread flours – especially if you’re making wholemeal dough , which doesn’t always rise as well as white bread.

A bread first rising can be done in the fridge overnight . This slows down the time it takes to rise to double its size, giving it a deeper flavour. It’s also a great limit , as you can start it yesterday , then clear it off the next day.