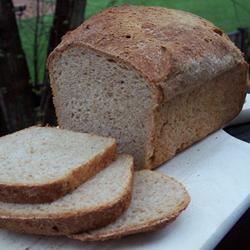 A loaf with good texture for a multi grain bread. Just enough of a taste of honey to make great toast or sandwiches.

In a small saucepan, combine the cornmeal and water. Bring to a boil and cook for 5 minutes. Pour into a large mixing bowl. Stir in salt, oil and honey; let cool until lukewarm.

In a large bowl, combine the cooled cornmeal mixture with the yeast, rye flour, whole wheat flour and 4 cups unbleached flour; beat well. Stir in the remaining flour, 1/2 cup at a time, beating well after each addition. When the dough has pulled together, turn it out onto a lightly floured surface and knead until smooth and elastic, about 8 minutes. Allow dough to rise 30 minutes, or until doubled.

Deflate the dough and turn it out onto a lightly floured surface. Divide the dough into two equal pieces and form into loaves. Place the loaves into two lightly greased 9x5 inch loaf pans. Cover the loaves with a damp cloth and let rise until doubled in volume, about 40 minutes. Meanwhile, preheat oven to 350 degrees F (175 degrees C).

Bake in preheated oven for 40 minutes, or until bottoms of the loaves sound hollow when tapped. Remove from pans and allow to cool on a wire rack.

The best flavour of the flour could make a real deal to your bread. Different brands do vary. Extra-strong or Canadian flours, which are naturally higher in gluten, may give you a best rise than standard dough flours – especially if you’re making wholemeal dough , which doesn’t always getting bigger as well as clear bread.

A bread first rising can be make in the fridge 24 hours . This slows down the time it takes to rise to double its size, giving it a deeper flavour. It’s also a great limit , as you can start it night before , then clear it off the next day.