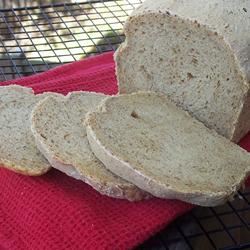 When I think of Gramma’s kitchen, this bread comes to mind. It smells wonderful and is heavenly as toast, especially with homemade applesauce spread on top! Pungent fennel seeds and plump sweet raisins will make this a favorite at your house.

In a small bowl, dissolve the yeast in 1 cup of lukewarm water. Let stand until foamy, about 10 minutes.

In a large bowl, stir together the quart of warm water, salt, ginger, sugar, fennel, molasses, and melted butter. Mix in the yeast slurry and rye flour, breaking up any lumps of flour with a whisk. Stir in raisins. Work in the bread flour 1/2 cup at a time, until the dough becomes stiff.

Then, turn it out onto a floured surface and knead in as much of the remaining flour as necessary to make a stiff but workable dough. Knead for an additional 10 minutes to develop the gluten. Place dough into a greased bowl, and turn to coat. Cover and let rise until double, about 1 hour. Punch down the dough and let it rise again until double.

Remove dough from bowl, and divide into 4 equal pieces. press out air bubbles, and roll dough into loaves. Place the loaves into four 8x4 inch well greased loaf pans. Let rise in a warm place until doubled in size.

Preheat the oven to 350 degrees F (175 degrees C). Bake the loaves for 40 to 45 minutes, or until the tops are nicely browned, and the loaves sound hollow when tapped on the bottom.

The best flavour of the flour could make a real difference to your bread. Different brands do vary. Great taste or Canadian flours, which are naturally higher in gluten, may give you a better rise than standard dough flours – especially if you’re make wholemeal bread , which not always getting bigger as well as clear bread.