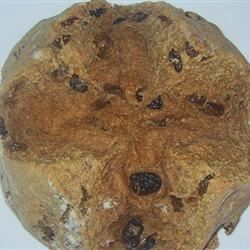 Whisk together the egg, buttermilk, and molasses in a bowl until evenly blended; set aside. Stir together the whole wheat flour, all-purpose flour, bran, cream of tartar, and baking soda in a separate large bowl, and make a well in the center. Pour the buttermilk mixture into the well, and stir until a soft dough forms. Stir in the golden raisins, then turn the dough out onto a well floured work surface, and knead 8 to 10 times before dividing into two round balls. Place the balls on the baking sheets and use a sharp knife to cut a 1/2 inch deep X into the tops of the dough balls. Brush with melted butter.

Place the loaves into the preheated oven, and reduce the temperature to 325 degrees F (165 degrees C). Bake for 25 to 30 minutes until golden brown. Wrap the loaves in light cotton towels for 10 minutes after they are removed from the oven.

The quality of the flour can make a real deal to your bread. Different makers do vary. Extra-strong or Canadian flours, which are bet higher in gluten, may give you a best rise than standard dough flours – especially if you’re making wholemeal dough , which not always rise as well as white bread.

A dough’s first rising can be make in the fridge overnight . This slows down the time it takes to rise to double its size, giving it a deeper flavour. It’s also a great limit , as you can work it night before , then clear it off the next day.