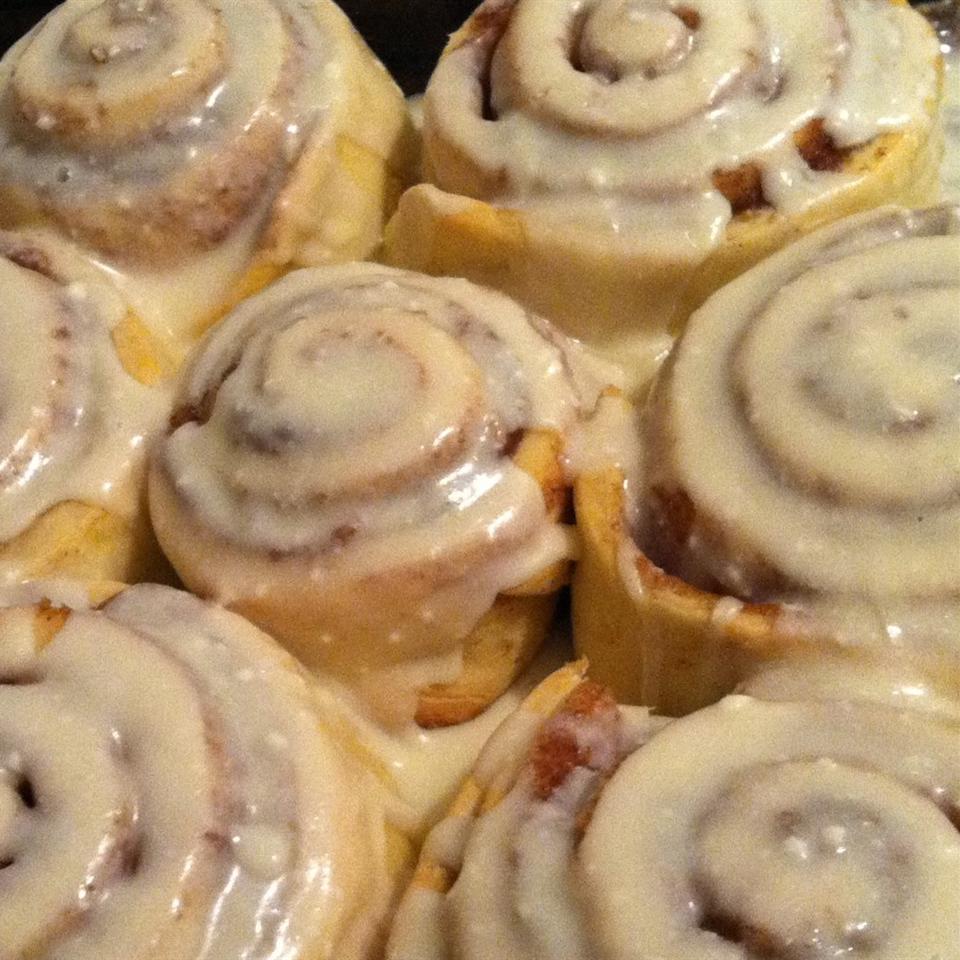 I came up with the recipe cooking at the fire station. It is my take of a recipe that was passed down from older firemen at my station. I love this recipe because the cinnamon rolls are fluffy and rise to be huge!

Sift 2 cups flour, sugar, and salt for dough together into the bowl of a stand mixer fitted with the paddle attachment. Stir in yeast. Add butter and blend at low speed until combined. Add hot water (the hottest it comes from your tap) all at once with the mixer running. Mix in egg until fully incorporated. Add remaining 2 cups flour and mix briefly until dough is soft and flour is incorporated.

Change to the dough hook and knead dough for 10 minutes. If dough does not knead, you may need to add a little bit more flour carefully while the mixer is running. Once the dough climbs up the dough hook you have the right consistency. Make dough into a ball.

Oil a bowl. Place the dough into the bowl and turn to coat with oil. Cover with a cloth and let sit until doubled in size, 1 to 2 hours.

Cover your countertop with flour and roll dough out to a large rectangle, roughly 18x24 inches. Sprinkle brown sugar, pecans, and cinnamon on the dough, then pour melted butter over top. Roll the dough up from the longer side and cut into twelve 2-inch pieces. Place the pieces in a baking pan or on a baking stone. Cover with a cloth and let rise until doubled in size, about 45 minutes. Keep a close eye on the rolls; if they start to fall or look deflated at all, bake them immediately.

Bake the rolls in the preheated oven until golden brown, 6 to 10 minutes.

Meanwhile, combine confectioners' sugar, butter, cream cheese, vanilla, and salt in a large bowl; beat with an electric mixer until no lumps of cream cheese remain. Whip for 2 to 3 more minutes on medium speed.

The quality of the flour can make a real deal to your bread. Different brands do vary. Extra-strong or Canadian flours, which are naturally higher in gluten, may give you a better rise than standard dough flours – especially if you’re make wholemeal bread , which doesn’t always rise as well as white bread.

A bread first rising can be done in the fridge 24 hours . This slows down the time it takes to rise to double its size, giving it a deeper flavour. It’s also a great timesaver , as you can work it night before , then finish it off the next day.