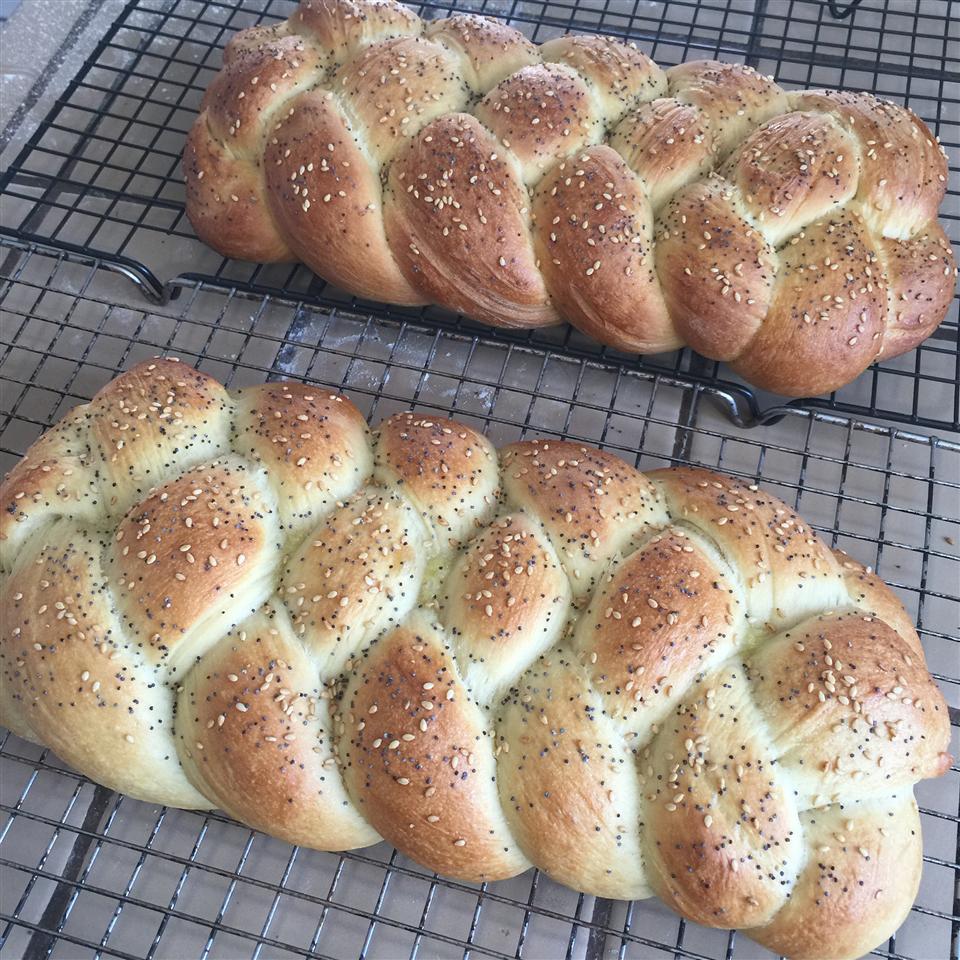 This recipe is for a decadent, rich Challah bread. No matter who I serve this to, everyone hails it the best Challah they’ve tasted. Makes 2 large loaves.

Dissolve the honey in the water in a large mixing bowl, and stir in the yeast. Set the mixture aside until the yeast forms a creamy layer on top, about 15 minutes. Stir in the salt, 2/3 cup of olive oil, and beaten eggs. Add the flour 1 cup at a time until the dough is slightly tacky, but not sticky wet.

Turn it out onto a floured surface, and knead until smooth and elastic, about 10 minutes. Lightly oil a bowl, place the dough in the bowl, turn the dough over a few times to oil the surface, then let rise until doubled in a warm, draft-free place, about 90 minutes.

To make the loaves, punch down the dough, and cut it into 2 equal-sized pieces. Cut the first piece into 4 equal parts. Set the second piece aside under a cloth to prevent drying out while you braid the first loaf.

To braid the first 4-strand loaf, roll the 4 pieces of dough into thin ropes about the width of your thumb, and about 14 inches long. Make the tops and bottoms of each rope thinner than the middle area. Pinch the tops of the 4 ropes together, and fan the 4 ropes out so they don’t touch.

Make a glaze by whisking together the milk, 2 tablespoons of olive oil, the egg white, and the sugar in a bowl. Brush the braided loaves with the glaze, to make a shiny crust, and bake the loaves on the prepared baking sheets in the preheated oven until they are light golden brown, about 30 minutes.

The best flavour of the flour could make a real difference to your bread. Different makers do vary. Great taste or Canadian flours, which are naturally higher in gluten, may give you a better rise than standard dough flours – especially if you’re making wholemeal bread , which doesn’t always rise as well as clear bread.

A bread first rising can be make in the fridge overnight . This slows down the time it takes to rise to double its size, giving it a deeper flavour. It’s also a great timesaver , as you can start it yesterday , then finish it off the next day.